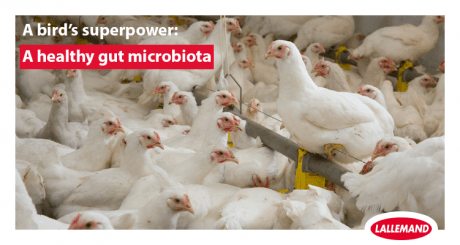 The poultry gut houses a complex and dynamic ecosystem formed by microorganisms (bacteria, protozoa, fungi, yeasts, bacteriophages, and other viruses), within the lumen and attached to the mucosa. This microbiota maintains an essential symbiotic relationship within the host. Understanding that strong relationship is key to appreciating the benefits of the live yeast Saccharomyces cerevisiae var. boulardii CNCM I-1079 on the gut microbiota balance and how it translates into performance enhancement on the farm.

Recent gut microbial analysis have confirmed the positive effect of S. c. boulardii on the digestive environment. Massacci et al. (2019) confirmed a highest abundance of Lactobacillus genus in caecal and fecal bacterial communities from birds supplemented with the probiotic.

The superpower of a balanced gut microbiota

in healthy birds, the gut microbiota contributes to nutrient availability through bacterial fermentation, enzymatic activity, and by promoting gut maturation.

It has been found that S. c. boulardii helps to enhance feed efficiency by increasing the activity of some of the brush border membrane enzymes (sucrase-isomaltase, lactase, maltase-glucoamylase).

the gut wall and its epithelium represent the first line of defense for the body. The digestive microbiota forms a barrier. It prevents the proliferation of transient enteric pathogens or opportunistic bacteria.

S. c. boulardii has been proven to reinforce the tight junctions that bind together the epithelial cells. As a result, the gut epithelial barrier is strengthened, preventing the translocation of potentially pathogenic bacteria to the mesenteric nodes and blood. The gut microbiota also produces antimicrobial metabolites or short-chain fatty acids (SCFA) that decrease the intestinal pH.

The gut immune system ensures another line of protection. The gut-associated lymphoid tissue (GALT) is well developed in chickens. The gut microbiota is able to enhance host defense mechanisms and immune response.

S. c. boulardii has been shown to help the recruitment of the immune cells — monocytes and granulocytes — into the lymphoid nodes.

Altogether, the benefits of live yeast on microbiota balance is translated into improved broiler performance.

A multi-analysis of a dozen of commercial field trials confirmed the zootechnical benefit of the live yeast probiotic fed during the whole life cycle of broiler chickens. It reveals an average feed conversion ratio reduction by 3 points as well as a strong effect on mortality (-19%). This translates into a 4:1 return on investment and comes on top of the live yeast benefits on carcasses quality and food safety.

LEVUCELL SB has been shown to be a helpful sidekick by balancing the microbiota population and supporting broilers performance.