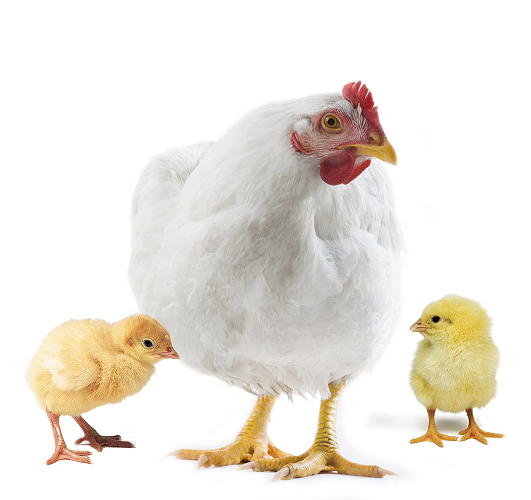 The poultry industry seeks for ways to improve efficiency and cost of production. One way to improve efficiency is to optimize the nutrition and management of the breeder hen to improve reproduction and the performance of the progeny. In the last five years new research has provided evidence on how micro nutrients in the breeder hen diet can improve the immune system of the progeny, providing new opportunities to help the chick develop the immune system, in the face of the antibiotics ban.   Zinc and specially in its chelated form fed to breeder hen is effective at improving livability of the young chick, by modulating the cellular and humoral immune response to pathogenic challenges.  With recent advances in epigenetics, we better understand the underlying mechanism by which maternal Zn can modulate gene expression of the chicks and improve immune development.  Increasing levels of Zn in the diet and in the form of chelates improves storage of Zn in the egg yolk and albumen and more Zn is available for embryo development.  In the gut, Zn improves gut barrier function, mucosal and systemic immunity, and reduced gut inflammation of progeny chicks by epigenetic modification of anti-inflammatory proteins, and chelated Zn is more consistent and effective than inorganic Zn.   Feeding Zn, especially in the chelated form, to broiler breeders improves livability of the progeny due to a more developed immune system.

Reviews by Kidd (2003) and Callini & Sirri (2007) summarized the breeder nutrition studies published in the literature. There are two aspects of progeny development that can be improved via maternal nutrition, one is growth performance and carcass yield, and the other one is the health and immunity of the progeny (Callini and Sirri, 2007).  Optimizing the levels and type of energy in the breeder diet improved carcass yield of the progeny (Lesson and Summer (2001, and Peebles et al (1999, 2002a)) It has been postulated that hen nutritional programs that increase yolk weight over egg weight provide more energy and protein to the chick posthatch and support faster growth of the offspring, especially in fast growing male broilers. Vitamins and minerals supplementation in breeder hen diets improve livability and immunity of the progeny (Callini and Sigri, 2007).  Supplementation of Zn has been shown to improve humoral and cellular immunity and help the progeny response to pathogenic challenges (Kidd 1992 and 1993).  Combination of Zn and Mn improved livability of the progeny (Virden et a., 2003).

Epigenetics and Progeny Immunity with Zinc

New advances in epigenetics has helped us better understand the mechanism by which maternal nutrition can impact progeny development.   Epigenetics is an important regulatory mechanism of gene expression independently of DNA sequence.  There are three types of epigenetic modifications: 1) DNA methylation, which causes DNA-histone compaction and represses gene expression; 2) histone modification in which histone acetylation causes DNA-histone relaxation and activates gene expression and 3) organization of nucleosome along DNA. Recent studies have further our understanding of the mechanism by which maternal nutrition could impact the health of the progeny via epigenetics.

In chickens the adaptive immune system is functionally immature and newly hatched birds are dependent on maternal antibodies transferred through the egg yolk.  Zinc has been associated with different aspects of the immune system and maternal Zn could improve the development of the immune system of the off-spring.  Li et al., (2015) evaluated the role of maternal zinc on intestinal immunity of the offspring and the underlying epigenetics mechanism in broiler chickens. In this study, broiler breeder hens were fed two levels of two sources of Zn (chelated Zn-MHA and inorganic ZnSO4) for 8 weeks.  The progeny chicks from those hens were fed either low (20 ppm) or normal (70 ppm) of inorganic Zn for 6 weeks.  Zinc content in the egg yolk and albumen gradually increased with dose and was higher in the yolk than albumen and in the chelated Zn treatments, suggesting further delivery of Zn to the progeny by the chelated Zn. To address gut immune development jejunal secretory IgA (sIgA) and mucin 2 gene expression (MUC2), and serum immunoglobulin Y (IgY) and antibody titers responses against several diseases (New castle and bursal virus) were measured. Compared to Zn deficient or inorganic Zn treatments, Zn-MHA supplementation to breeder hens enhanced mucosal immunity by increasing secretory IgA production in progeny chicks either low or normal Zn diet (Figure 1A); 2) improved gut barrier function by increasing MUC2 gene expression (Figure 1B); 3) enhanced systemic immunity in progeny birds by increasing concentration of IgY in offspring chicks at 1 d of age  and antibody titer of NDV and IBDV in offspring chicks at 28 d of age (data not shown). These results suggest that Zn-MHA supplementation in breeder diet is more effective than inorganic Zn at improving gut barrier function, mucosal immunity and systemic immunity of progeny chicks. 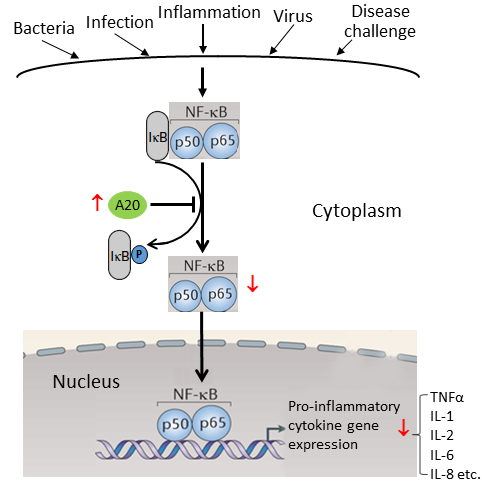 In summary, Zn supplementation in breeder hens improved gut barrier function, mucosal immunity and systemic immunity and reduced gut inflammation of progeny chicks by epigenetic modification of A20 promoter, and chelated Zn (Zn-MHA) is more consistent and effective than ZnSO4.