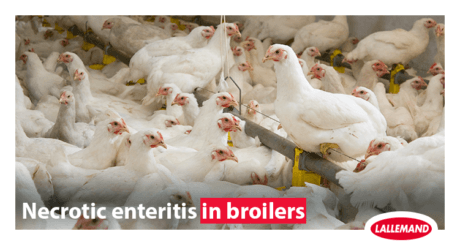 Necrotic enteritis (NE) is today the most common and costly bacterial disease in broiler farming. It is a multifactorial pathology caused by Clostridium perfringens. Its subclinical form significantly impairs flock performance, while its acute form causes high mortality. Recently, the limitation on the use of antibiotics in poultry production has seen a NE resurgence. Hence the interest in searching for novel effective tools to help prevent this issue. A recent publication indicates the potential of the competitive exclusion (CE) approach in this field.

CE solutions are cultures of beneficial bacteria that improve the digestive microbial balance. Their proposed modes of action include:

The beneficial bacteria are administered as early as day one by spraying the chicks to promote the early establishment of a beneficial digestive microflora.

A trial was conducted in the United States (Southern Poultry Research, Georgia) to evaluate the effects of a CE solution (AVIGUARD) to help prevent the incidence of NE in a broiler commercial farm, as compared to traditional antibiotic feeding (Bacitracin Methylene Disalicylate, BMD). Male broiler chicks were fed a corn-soy commercial-type broiler 3 phases, at libitum.

The AVIGUARD group was treated with a single spraying at day 1. The antibiotic group received same basal feed with BMD throughout the trial (42 days). Chickens were challenged with coccidiosis at day 14 (Eimeria maxima) and then with C. perfringens at day 18,19 and 20.

After 42 days, NE lesion scores were the lowest with AVIGUARD, and NE mortality was significantly lower in the AVIGUARD group (Figure 1) as compared to control and antibiotic group. It was concluded that the CE solution, applied only once to the chicks, performed equal to, or better than, the antibiotic, which was fed continuously to the chicks.

When looking at growth performance, there was no significant difference observed for body weight or FCR between the AVIGUARD and the antibiotic groups. Consequently, due to a lower NE mortality, overall performance was superior with the CE solution (Figure 2).

A farm’s NE control strategy could benefit from a CE solution in addition to strict on-farm hygiene management practices to keep pathogens at bay.