TOP NEWS
Home News REINFORCING THE GUT WALL INTEGRITY OF THE CHICKS BY INCREASING MUCIN SECRETION, THANKS TO ALGAE! 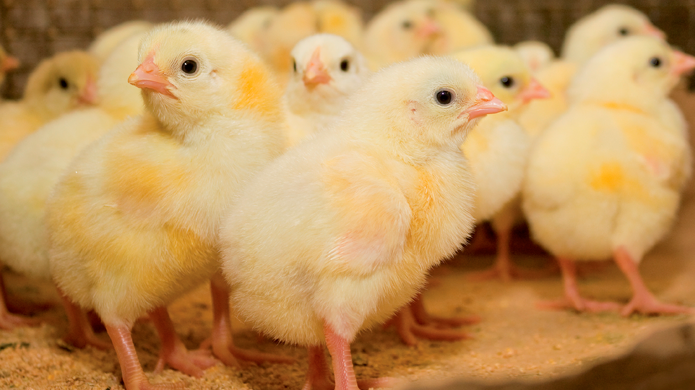 REINFORCING THE GUT WALL INTEGRITY OF THE CHICKS BY INCREASING MUCIN SECRETION, THANKS TO ALGAE!

Farmers, poultry integrators, avian zoo-technicians and veterinarians are continually seeking to increase the performances of poultry farms, within the context of limiting the use of antibiotics in all poultry species. Olmix has recently developed new 100% natural solutions, able to promote an optimal gut integrity through a higher production of mucins, the main components of the intestinal mucous layer.

Importance of gut development at start

In poultry production, the first 7 days of life (particularly the first 36 hours) are very important to ensure the future performance of the flock. During the first week of age, the small-intestinal weight relative to total body weight increases rapidly from about 2.5% at hatch to about 7% 1 week after hatch. The development of the small intestine consistently deteriorates at low feed intake levels and with suboptimal protein nutrition. This may compromise the intestinal barrier function. This often appears in the first hours of life due to a long time in the incubator after hatch, and subsequent long transportation time to the farm. Hence, the desired development of the intestine and more specifically its barrier function (against aggressions: toxins and pathogens…) in chicks after hatch may not be achieved and this may affect an early survival rate due to digestive troubles.

The intestinal mucus gel, mainly composed of mucin (glycoproteins), secreted by goblet cells is one of the first line of defense against external aggressions. Mucus forms a protective layer across a variety of epithelial surfaces. In the gastrointestinal tract, the mucus barrier should permit the uptake of nutrients, while excluding potential hazards. Consequently, it serves many functions, such as lubrication and maintenance of a hydrated layer over the epithelium; permeable gel layer for the exchange of nutrients with the underlying epithelium and barrier to pathogens, destructive enzymes, and toxic substances.

A lot of studies have showed that mucins can reduce the translocation of some pathogens. Gut pathogens must pass through this mucous layer before adherence to and invasion of the epithelial cell. Reducing mucin production can allowed a rapid translocation of S. typhimurium through other organs as Peyer’s patches, spleen, liver… The biosynthesis and secretion of mucins can be influenced by immediate or delayed access to feed and feed withdrawal, but also by specific inducing components. Thus, improving the mucosal barrier function, via increased mucus secretion, is a new strategy to keep gut integrity and animals healthier while potentially decreasing additionally antibiotic use.

Algae, a source of biological treasures

In 2000, Barcelo et al showed that an algae extract from Ulva sp. could stimulate the excretion of mucin proteins from colonic goblet cells, making it interesting for use against various intestinal diseases. In a recent study, conducted in partnership with IBD (intestinal biotech development, in France), Olmix could also demonstrate that the MSP®MUCIN could reinforce the intestinal barrier by modulating the expression of mucin at the mRNA level. For this invitro study, two colonic epithelial cell lines were used, the enterocyte-like Caco-2 cells and the mucus-secreting HT-29 MTX cells. The MSP®MUCIN was tested in triplicate by addition in these cell cultures for 1h or 4h, at 3 concentrations (0.01, 0.1 and 1mg/ml), in standard conditions. The gene expression of several mucins (MUC1, MUC2, MUC4, MUC5AB and MUC5AC) was evaluated by mRNA quantification by qRT-PCR.

MSP®MUCIN proved its capacity to induce the expression of both membrane-bound mucins (MUC1) involved in cell-cell and cell-matrix interactions, as well as cellsignaling; and gel-forming mucins (MUC5AC and MUC2), which are particularly involved in host-protection and control of pathogen dissemination, in both standard and inflammatory conditions.

These scientific findings, explaining the mode of action of the MSP®MUCIN are in line with in vivo poultry results obtained with a commercial product (SeaLyt) mainly composed of the MSP®MUCIN. One of the trial was performed on twenty-eight thousand DOC (Ross 308) distributed in two identical separated rooms within the same building. The control group received the standard prophylaxis of the farm (vitamin A, D3 and E complex during the first 7 days of life and the test group received SeaLyt, in the drinking water during the first 48 hours after the setting-up of the chicks at the farm. The mortality was recorded daily during the first 7 days. Ten broilers in each group were used for intestinal histological evaluation. Three ileal sections per broiler were collected at day 3 and day 7 and goblet cells were identified by staining slides with periodic acid-Schiff (PAS) reagent. Sections were examined by light microscopy (50×) to determine the number of goblet cells and the size of the mucous vacuoles contained inside the goblet cells.

The use of SeaLyt triggers a decrease in mortality rate during the first week (-40%, P< 0.05, figure 3). In terms of goblet cell numbers, there was no difference between Control and SeaLyt group. However, the average size of the mucus vacuoles present in the goblet cells was larger within the SeaLyt group (+ 13%, P<0.05), particularly at day 3 (figure 3 & 4). 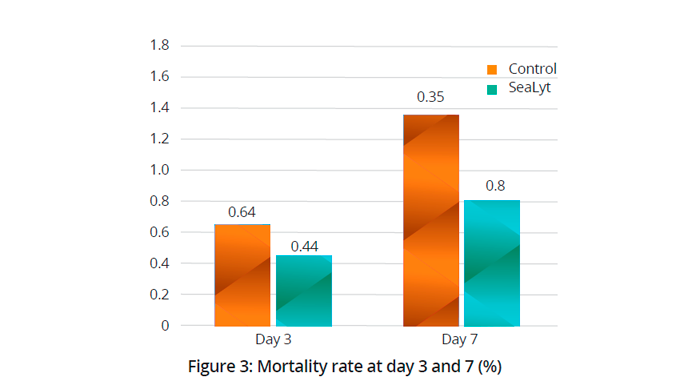 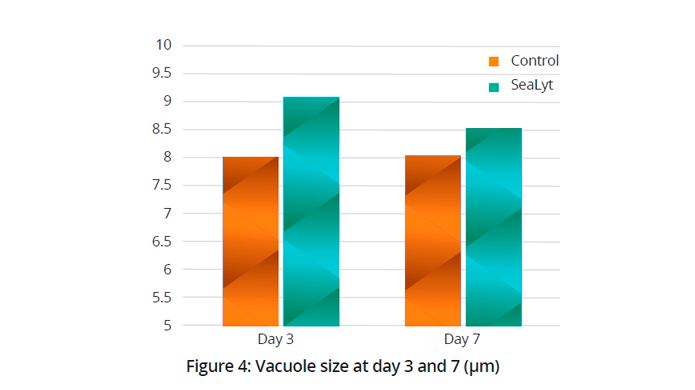 In the field, the use of of SeaLyt at the start of the chicks, in the drinking water enables an effective rehydration and reduces the risk of digestive troubles leading to higher survival rates Based on MSP®MUCIN, quickly metabolized energy (sugars) and electrolytes (impact on rehydration and stimulate feed intake), SeaLyt contributes also to better litter quality and thus to the decrease of locomotion problems and poor leg health. SeaLyt, naturally contributes to the well-being of broilers during brooding.