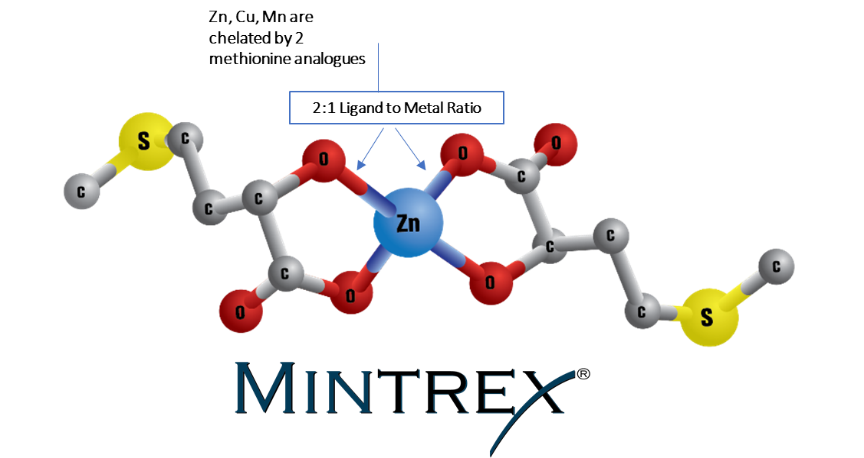 Trace minerals: how to do more with less?

On the occasion of MINTREX® launch in Middle East, Aymen Elamri, Technical Manager for Novus North Africa and Middle East, explains why these trace elements in bis-chelated form have become essential for animals.

Around the world, planned changes in regulations on the inclusion of trace elements in animal feed are shaking up historical approaches to mineral supplementation. This has led to questions not only about the quantity of minerals to be added to different feeds, but also about their source.

When it is no longer possible to feed animals with more trace elements, the key is to use solutions that have a greater effect on the animal with less added minerals.

Indeed, some sources allow greater availability of minerals at absorption sites. To do this, a mineral source must be resistant to changes in pH, less prone to antagonism, and deliver more minerals to absorption sites in the gut.

Low pH environments, such as in the stomach, can cause dissociation, the process by which compounds separate into ions. This dissociation can cause the metal ion to react with antagonists such as phytates, calcium or phosphorus, which reduces the mineral available for absorption in the small intestine; it is then excreted.

The unique chelated structure of MINTREX®, which binds each metal atom (Cu, Zn or Mn) to two molecules of hydroxy analogue of methionine, makes the mineral source more stable over a wide pH range (Figure 1).

Once the trace elements enter the bloodstream, they can be transferred to different tissues to meet the animal’s mineral needs. This process is tightly controlled and specific, as some trace elements can be toxic when they accumulate in the body. The body has therefore developed several mechanisms, including protein chaperones such as metallothionein, to protect itself against the free penetration of trace elements into the enterocytes or into the blood. These proteins also allow the element to be stored and transported to where it will be used.

For example, when zinc is supplied in sufficient quantity, the expression of metallothionein increases, which means more stored zinc. A study of the effects of zinc sources and levels on metallothionein expression in the jejunum of broiler chickens revealed that supplementation of 70 ppm Zinc in the MINTREX® form resulted in greater mineral storage than other sources. (Figure 2) 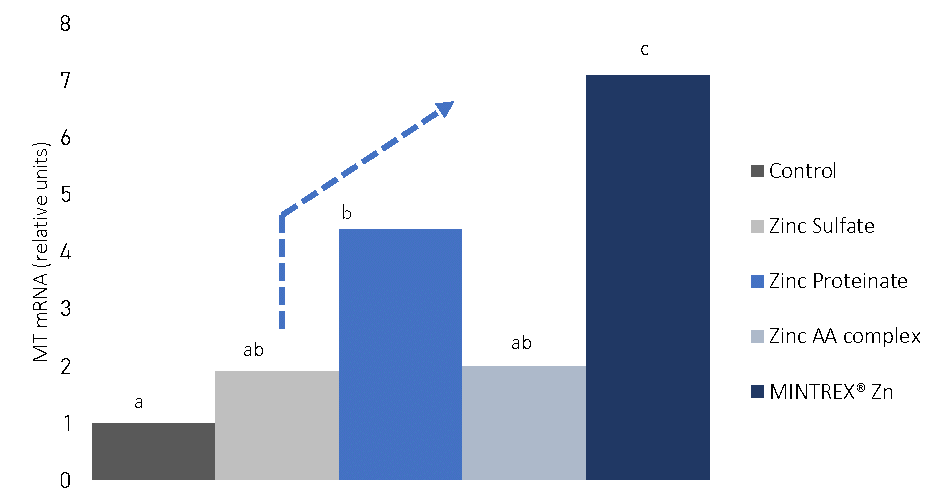 The increased production of metallothionein in enterocytes is a good measure of the greater absorption of zinc, but it does not prove that the trace elements so absorbed are more available to the animal.

Since the discovery of MINTREX® in 1999, NOVUS research has shown, through numerous trials, the benefit of providing all the body’s tissues with the bioavailable trace elements Zn, Cu, Mn that they need.

This is reflected by better ADGs and consumption indices, an improvement in reproduction parameters, locomotor problems but also criteria such as pododermatitis, the qualities of the carcass in poultry, or the quality of the shell egg.

Improve performance and reduce the impact on the environment

Based on this evidence, NOVUS is able to offer, thanks to this unique source of trace elements, a new nutritional strategy: Reduce & Replace, which consists of reducing the intake of trace elements Copper, Zinc and Manganese by replacing them with MINTREX ®. An example of this strategy is presented in figure 3: The performances of chickens fed with reduced doses of trace elements Zn, Cu, Mn in MINTREX® form, showed better ADGs than the same animals fed either with standard levels, or with low levels of inorganic trace elements. This resulted in a decrease in the release of Zn in the faeces.

This makes it possible to do more with less, improving animal performance while limiting the impact on the environment.